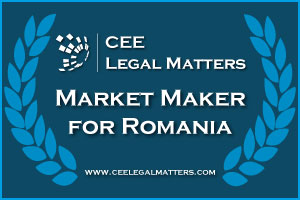 On June 1, 2017, at a special awards ceremony at the Intercontinental Hotel in Warsaw, Ion Nestor, Co-Managing Partner of NNDKP, was named the Market Maker for Romania, a lifetime achievement award given to the senior lawyer identified by peers as having played the most influential and significant role in creating the country’s modern legal market.

The Market Makers awards were conceived of, designed, and presented by CEE Legal Matters — the widely-read source of news and information about the lawyers and legal markets of Central and Eastern Europe — at the Gala Dinner of the CEE GC Summit, an annual two-day gathering of General Counsel and Heads of Legal from across the region.

More information on the event and awards, as well as a complete list of all Market Makers can be found here.