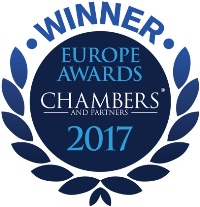 Nestor Nestor Diculescu Kingston Petersen Named for the Fourth Time Law Firm of the Year in Romania, a First on the Local Business Law Market

Chambers and Partners, one of the most reputed international guides organized the Chambers Europe Awards gala on 7 April 2017 in London.

Nestor Nestor Diculescu Kingston Petersen (NNDKP) has been recognized as the “Law Firm of the Year in Romania” for the fourth time in the eight years since this distinction started being awarded to Romanian law firms. Alina Radu, Partner and Head of the Banking and Finance practice accepted the award on behalf of NNDKP at the gala that brought together some of the most reputed law firms in Europe.

“We are honored and extremely proud to receive this prestigious distinction. I would like to thank my colleagues for their exceptional work over the past year, and also in general, and for their contribution to projects with a high degree of sophistication across all practice areas. In addition, we thank our clients for the confidence they have placed in us and their loyalty, without which this distinction would not have been possible”, stated Ion Nestor, Co-Managing Partner of NNDKP.

NNDKP’s recognition as the law firm of the year in Romania confirms the firm’s presence at the top of the published rankings, both at practice area level as well as in the Leading individuals section, where 16 of its 30 partners are singled out.

Similarly to other international legal guides, Chambers Europe bases its year-long research on in-depth interviews with clients and peers in order to assess the reputation, expertise and technical skills of key lawyers, professional conduct, client service, commercial awareness and diligence, proactivity and loyalty to clients.