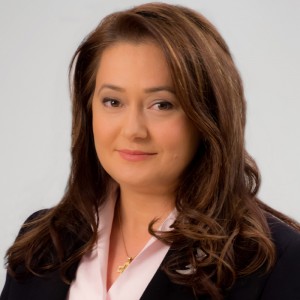 Sorina Olaru is a highly experienced litigator with over 21 years of experience in representing clients before the Romanian courts of all levels and specializations (civil, commercial, labor, or administrative), including the High Court of Cassation and Justice and the Constitutional Court of Romania. Sorina often sits as an arbitrator in domestic arbitration proceedings (CCIR rules and ICC arbitration). She is a member of the Board of Directors of the Court of International Commercial Arbitration attached to the Chamber of Commerce and Industry of Romania and a member of the ICC Romania National Committee.

Sorina is a member of the team involved in drafting of the new set of arbitration rules of the Court of International Commercial Arbitration attached to the Chamber of Commerce and Industry of Romania.

Her practice focuses on:

Included in international rankings since 2011; most recently:

She is described by a client as “very attentive and knowledgeable.”
(Chambers and Partners, 2021)

“Sorina Olaru is a very strong leader who has the ability to handle complex matters, with her in charge of our litigation we always had the comfort we are in good hands.”
(Legal 500, 2020)

Sorina Olaru is “very prepared” and “thinks strategically” in proceedings.
(Chambers and Partners, 2020)

A client states “I am very impressed by her performance in litigation”.
(Chambers and Partners, 2019)

Sources emphasise her “thorough and dedicated” approach.
(Chambers and Partners, 2018)

Sorina Olaru is “an experienced and reliable lawyer” who “definitely inspires confidence”.
(Chambers and Partners, 2017)